Between free will and statutory entitlement...

As everyone might be concerned by such an issue, which can have important repercussions in various fields of the law (jurisdiction, applicable law, validity of testamentary dispositions, tax, etc.), it is vital to be well informed on the best solutions suitable to each particular case.

According to art. 538 §1 CC, succession commences in respect of the entire estate at the deceased’s last domicile.

Concerning international matters, art. 86 of the Federal Act on Private International Law (APIL) provides that Swiss judicial or administrative authorities of the last domicile of the deceased have jurisdiction to take the necessary measures to deal with the inheritance estate and to settle disputes relating thereto. Nevertheless, this provision does not affect the exclusive jurisdiction claimed by the state where real property is located.

In certain conditions, when a Swiss national domiciled abroad deceases, judicial or administrative authorities of his or her place of origin might have jurisdiction. For instance when the foreign authorities do not deal with such estate or when the deceased submits his or her estate, partially or in whole, to the laws of Switzerland.

In accordance with art. 90 §1 APIL, the inheritance estate of a person who had his or her last domicile in Switzerland is governed by Swiss law. However, a foreign national may submit by will or inheritance contract his or her estate to the law of one of his or her national states. Such submission is void if, at the time of death, the deceased no longer had such nationality or acquired Swiss nationality.

The law applicable to the inheritance estate determines what is included in the estate, who is entitled to inherit and for what share, who is liable for the debts of the estate, which legal institutions of inheritance law may be relied upon, and which measures may be ordered and subject to which requirements.

In addition, the implementing details are governed by the law of the state whose authority has jurisdiction. Such law governs in particular conservatory measures and the distribution of the estate, including the administration by an executor.

Succession commences on the death of the deceased. Insofar as dispositions and divisions made during the deceased’s lifetime are relevant under law of succession, they are taken into account according to the condition of the estate as at the time of his or her death.

The legal and named heirs are entitled to disclaim the inheritance passing to them.

Nevertheless, there is a presumption of a disclaimer if at the time of his or her death the deceased had been officially declared insolvent or was manifestly insolvent.

The time limit for a disclaimer is three months since the statutory heirs learned of the death, unless they can show that they did not learn of their succession rights until later, and for named heirs, from the date they received official notification of the testator’s dispositions.

If an inventory has been drawn up as a precautionary measure, the disclaimer time limit for all heirs begins on the date on which the authority notified them that the inventory was complete.

Due to Switzerland’s federal structure, there is no centralized tax system valid for all cantons. As a consequence, tax legislation varies considerably from one canton to another, both in terms of core stipulations and tax rates and tariffs.

From a fiscal point of view, there should generally be no difference whether a person transfers assets during his/her lifetime or in the estate after the death.

Inheritance taxes and gift taxes, if any, are levied at cantonal levels. In Geneva, for instance, since 1st June 2004, there are neither inheritance taxes nor gift taxes on assets transmitted by succession or by donation inter vivos, to the extent that the transfer takes place between a deceased/donator and his/her descendants or ascendants or in the favour of the surviving spouse or the registered partner, unless the deceased/donator is or was in the benefit of a lump sum taxation.

Nevertheless, after the transfer of the assets, the heir or the done will be subject to wealth taxes, which are imposed at a cantonal level on the aggregate value of the net asset of the individual.

Potentially, the heir or the done could be taxed on capital gains on real estate transactions.

Please note that these are very general considerations and that more accurate information can be provided to you concerning your individual case.

Statutory inheritance and shares in estates

Swiss inheritance law imposes a statutory order of inheritance. This assertion is valid on the condition that the deceased did not make any testamentary provisions.

According to the Swiss Civil Code, the order of inheritance is determined by a system of family relationships (parentele or orders) of the deceased.

There is a hierarchy among the three orders: as long as at least one member of a parentele can inherit from the deceased, all members of the following orders are completely excluded from the inheritance estate.

Four general principles apply to parenteles.
• Priority: inside one order, the older generation is prior and excludes the following generations from inheritance estate;
• Equality: the heirs of the same generation inherit equally;
• Representation: if, for various reasons (predecease, disinheritance, unworthiness to inherit or disclaimer), heads of one parentelecannot inherit, their issue generally represent them and inherit instead of them;
• Growth: if an heir does not inherit and is not represented, the share that he or she would have received would grow those of the other heirs of the parentele.

The proportions of the shares of each heir vary considerably according to the specificities of each individual case. Don’t not hesitate to contact our lawyers if you need help regarding calculations. 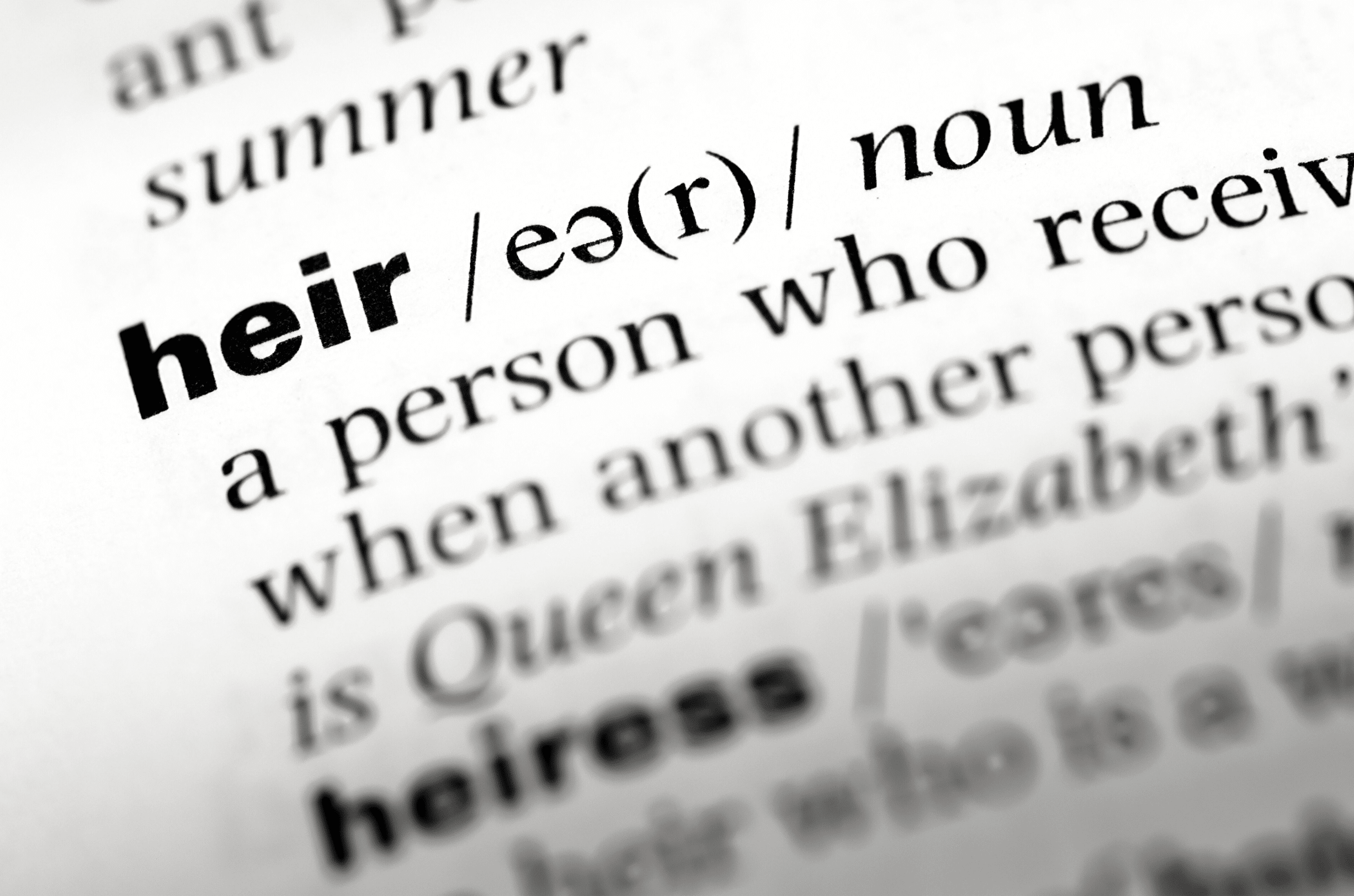 Testamentary dispositions taken by the deceased

Under Swiss law, the testator has the opportunity to make his/her own arrangements concerning the distribution of his/her assets, in whole or in part, subject to the statutory restrictions provided by art. 470 and 471 CC.

The statutory entitlement is:
• for any issue, three-quarters of their statutory succession rights;
• for each parent, one-half; and
• for the surviving spouse or registered partner, one-half as well.

A person who is not survived by any such heirs may dispose of his or her entire property by testamentary disposition.

The testator can make such arrangements by the means of a Will or of a testamentary contract.

Whoever has the capacity of judgement and is at least 18 years old has the right to draw up a Will disposing of his or her property in accordance with the limits and forms prescribed by law.

A Will can be established in three different forms:
• the Will drawn up and certified by a notary (Will by public deed);
• the holographic Will; and
• the oral Will, but only in case of emergency.

The testator may revoke the Will at any time. A new Will replaces the former one unless it constitutes, without any doubt, a mere amendment to the previous document.

To avoid any risk of uncertainty or misunderstanding, it is clearly preferable to mention in the last Will that all previous testamentary dispositions are revoked.

A testamentary contract is an agreement between the testator and one or several contractual parties, with the participation of a notary and two witnesses. The contract must be drawn in the form of a Will by public deed. Their content can vary from one agreement to another (attributive or renunciation agreements, etc.).

Such a contract cannot be revoked unilaterally but only with the concourse of all the contracting parties and in the form of a written agreement.

A testator may nominate in the Will (but not in a testamentary contract) one person or several people to have legal capacity as executor(s) of the Will. The appointment of an executor may be a wise decision, especially in the case when the estate is disputed; the beneficiaries live in other countries or simply because of the complexity of the estate.

The executor must be informed of his appointment by the competent cantonal authority and has 14 days after the notification to accept or deny the mandate. He/she will have various competences and duties, which basically are to administer the estate, collect debts due to the deceased, pay the debts of the estate and distribute the estate. He/she will be granted adequate compensation for her/his services.